Turn on suggestions
Auto-suggest helps you quickly narrow down your search results by suggesting possible matches as you type.
Showing results for
Search instead for
Did you mean: 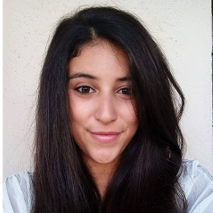 The Local Interconnect Network (LIN) was developed as a complementally bus standard to the Controller Area Network (CAN bus) to address the need for a cost-efficient network for lower performance devices within the vehicle.  While the CAN network was already in place within vehicles, its high bandwidth and advanced error detection capabilities were overkill (and thus, cost-prohibitive) for lower performance applications such as seat and window controllers. Today’s vehicles use a combination of CAN for powertrain and body communications, LIN for low-cost applications such as body electronics, and FlexRay for high-speed synchronized data communication.

NXP's Irina Costachescu provides an overview of CAN FD standard:

History
After the CAN specification was developed in the late 1980s, it was increasingly used by automotive manufacturers to network the various Electronic Control Units (ECUs) together within the car.  However, for lower speed, less critical functions the CAN bus became too expensive to implement.  Manufacturers began using a variety of serial communication technologies to address this, but this caused compatibility issues.  A consortium comprised of five European automakers (Audi, BMW, Mercedes-Benz, Volkswagen and Volvo), along with technology companies Volcano Automotive Group (now Mentor Graphics) and Motorola (now NXP) was founded in the late 1990s to develop the LIN specification, and the first version was published in 1999.  The LIN Consortium developed and maintained the specification up to v2.2 in 2010.  In 2013, the LIN specification was transcribed to the International Organization for Standardization (ISO) and was released as ISO standard ISO 17987 in 2016.

Architecture
The LIN bus is a broadcast serial network with one leader node and up to fifteen follower nodes configured on a single, 12V wire up to 40 meters in length.  A leader contains both a leader task and a follower task, and the leader task controls all communication over the LIN bus.  Follower nodes contain a follower task only and cannot initiate communication at all; they can only (1) ignore, (2) subscribe (receive) or (3) publish a response.  The leader node can also act as a follower by replying to its own messages.

LIN nodes are usually comprised of a microcontroller and a LIN transceiver, but custom hardware or ASICs could also be used.  Sensors, actuators or other control devices are connected into the LIN network through the MCU.  This arrangement of a LIN leader and its follower nodes as shown in Figure 1 is often referred to as a “LIN cluster.”

There are six different types of LIN frames, although most often the first one – unconditional – is used.  The differences between the various types only have to do with timing of how they are transmitted or the content of the data bytes; the structure of a frame does not vary between frame types.  Let’s look at the different types of frames used.

Operation
As previously stated, all communication on the LIN bus is initiated by the leader node.  The leader controls the sequencing of message frames, which is fixed in a schedule table.  A schedule table organizes message frames into slots and sets the interval between the start of a frame and the start of the following frame.  LIN frame slots are scheduled based on a LIN cluster time unit which is usually 5-10 milliseconds.

Within an individual LIN cluster, the leader node loops through each of the follower nodes with a request for information, and each follower responds with data when polled.  Data is transmitted as data bytes serially over the LIN bus, with a maximum baud rate of 20 kbit/s.  Where LIN really gets useful, however, is when multiple LIN clusters are connected via the CAN bus within a larger system, such as a vehicle, as shown in Figure 3 below. 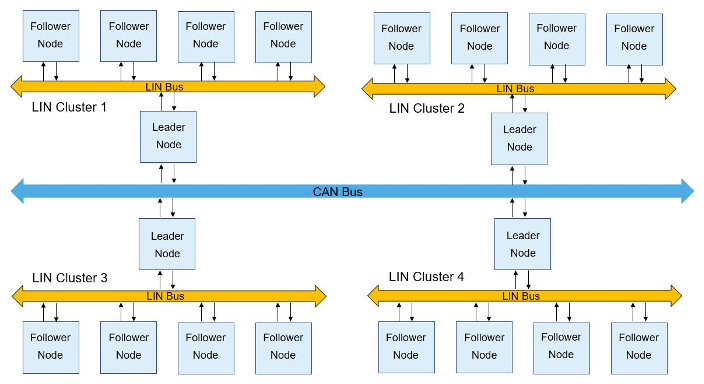 Error Detection
Per the LIN protocol, error detection is handled by the follower tasks utilizing the checksum field, eliminating the burden of error monitoring from the leader task.  If a follower encounters an error in a frame (known as a bit error), it aborts processing of the frame until it detects the next header transmitted by the leader.  In the original LIN specification, the classic checksum calculation was done over the data bytes only.  Since LIN 2.2 was published, an enhanced checksum algorithm has been used to protect the data bytes as well as the protected ID.

LIN can also provide for error reporting to the network.  Whenever a frame received or transmitted by a follower node contains an error in the response field, the follower is required to report a Response_Error status bit to the leader in one of its transmitted frames.

Power Management
In addition to saving on costs the LIN bus also saves power.  This is accomplished by utilizing two modes: Sleep and Active.  When the leader node sends a diagnostic request (ID 60), each follower on the bus will automatically go into Sleep mode after four seconds of bus inactivity.  A wake-up frame may be sent by any node requesting activity on the bus, either the Leader node enacting on its schedule or a Follower node activated by its internal software application (ie button press).  After a wake-up signal is received, all nodes run through their start up procedures and wait for the leader to send a Break field.

Benefits of LIN
To summarize the points above, the LIN bus offers several advantages for automotive and industrial use cases.  It is particularly useful in complementing the CAN bus by offloading devices where speed and fault tolerances are not critical.

LIN Applications
LIN’s simplicity and low cost make it an attractive option for automotive subsystems where speed and bandwidth are not the primary concerns.  Today’s vehicles contain multiple LIN clusters to control these subsystems and interface with the vehicle’s CAN network via the LIN leaders.  Automotive applications where LIN is used today include:

Beyond the automotive sector, the LIN bus is being increasingly adopted within appliance and industrial markets as it provides an inexpensive, feature-rich option for applications with multiple connected nodes, such as:

NXP LIN solutions
As the world’s largest provider of automotive semiconductors, NXP provides multiple CAN and LIN solutions including MCUs and processors with integrated CAN/LIN controllers, CAN and LIN transceivers, LIN bridge chips, System Basis Chips and development tools and software that support all of these.  To get started using LIN in your application, take a look at the examples included within our Model-Based Design Toolbox (MBDT), or within the MCUXpresso IDE or S32K Design Studio IDE.