Use KW36 as SPI slave

Use KW36 as SPI slave

I have two questions related to FRDM-KW36 board

1. I see from user manual that Header is Arduino compatible, but when I see the schematic I got confused because SIN,SOUT,SCLK are from SPI group 0 and only chip select (PSC0) is from SPI group 1. How this combination can be used? In my opinion, if this is compatible to Arduino then at J2 Pin3, it should be the chip select (CS) from the same SPI group.

Below is the image for quick reference 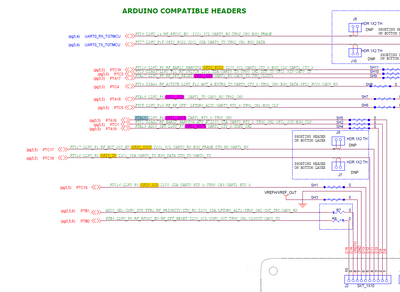 2. Does KW36 need pull up resistor for SPI lines? I see that SPI interface to on board flash has no external pull resistors except for CLK and CS.

I just took a look at the FRDM-KW36-RevB1 Schematic and I can see:

And the SPI port pins match the Arudino Uno SPI Reference pinout which are:

I use the Arduino Uno prototyping shields all the time with Freedom boards.  Despite having to understand the pinouts really well when you wire up your prototypes, this approach works quite well (a lot better/easier than using Tower boards).

But, there is an issue and that's if you want to use an pre-defined Arduino shield with a Freedom board - the short answer is that you can't.  Maybe there are some that will work with the various Freedom board pinouts (just using DI/DO and Analog pins) and maybe it's worth using them with the aformentioned bit-banging but I think it's best to recognize that you're going to be doing some custom wiring on a prototype shield.

As for your second question, PCS should NOT have a pull up.  It's not an Open-Drain bus.  It should always be driven high by the master when data is not being sent.

Thank you for your detailed explanation, it really helped. Looks like I have to tinker a bit to make board work for my application.