The border router device provides connectivity of the nodes in the Thread network with the possibility to connect to the networks as the www.

1. Flash udoo_neo_os_nxp.img on an SD card using a tool. You could use any tool to flash the image, make sure that the SD card is correctly formatted.

You have connected your Udoo Neo board to an Ethernet cable, just open a new terminal to be sure that you have a connection. You could type the ping 8.8.8.8 command.

If you do not have the IPV4, you could access connection your board to your computer and use the USB IP. After that, you could open a browser and enter to the Udoo Neo page using the USB IP. You could use the different address for creating a SSH connection.

Copy the Docker image and Bash scripts to the Udoo Board;

The command will take some time

Launch a Docker container
In this case, the UDOO NEO Extended doesn't have an Ethernet port, so, there is a USB converter to Ethernet. The OpenThread Example requires an IPV6 address 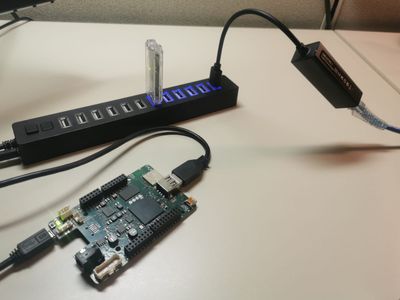 Note: You have to have Ethernet Connection because the OpenThread requires IPV6.

Be sure that the file has the execute permissions.

The image below shows the process of the container.

You cannot use this terminal, as this is a running Docker instance. It will output logs from the wpantund while it’s running. 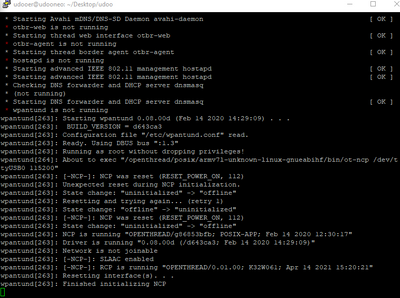 Open a new terminal and look at for the container ID

After that, open a browser and search the IPV4 of your UDOO Neo, and you will find an OpenThread web page. 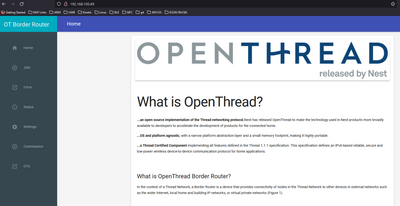 On the left side, select the option form, and a new page will be displayed for the network creation.

Then you can ask for the wpanctl status, it will show all the Thread information, the address, the channel of the network, etc.

In the same UDOO terminal, start the border router internal commissioner and allow that a Thread node with the preshared key could join in this network.

Flash another JN5189/K32W using the REED example and type the next command for enabling and join to a Thread Network.

After the joining process is complete, type the next command to attach to the border router.

Look at the image below, you will notice the Node B Commands. 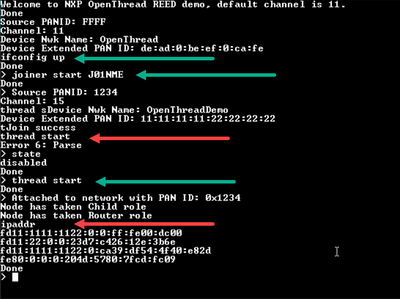 For a better reference please look at the OpenThread Demo Applications User Guide included in your SDK documentation. "\K32W061DK6\docs\wireless\OpenThread"