I'm using MCUXPresso IDE + custom board with a MK10 kinetis microprocessor and a J-Link Ultra programmer. This works great in general but I'm trying a slightly more complicated set up and have run into a problem.

I've added a custom bootloader to my processor which boots the app firmware. The app firmware has a 256 byte header including the length and CRC of the firmware. This header is at 0x1_0000 and the actual firmware starts at 0x1_0100 (AKA immediately after the header).

If I do a debug launch as normal the tools program the built .axf which does not include this custom header, and therefore the bootloader sees the app firmware as invalid and overwrites it / refuses to boot.

If I take the .axf convert it to a .bin and use a helper script to append this header, I can then program it manually using JLink command:

I would like to be able to do the same via the debug launch so I can program and debug my code directly via MCUXpresso IDE. Unfortunately I haven't managed to find any docs that explain how to use each of the options, and have no success with my initial attempts.

On the startup tab (of the debug launch) I can change it to load the image via a file, which I can set to my .bin and specify the offset (0x10000). However that doesn't seem to work, the previous firmware boots, and diffing a dump of the flash shows no changes.

Another option I've found is to disable the "load image" checkbox and instead add the following to the initialization commands:

This works occasionally (three out of about 10 attempts). When it works I see the processor reset and the bootloader loads the new app (but interesting enough it doesn't seem to hit the auto inserted breakpoint). The rest of the time the processor doesn't even reset, which is interesting because that monitor reset should cause a reset even if the loadbin failed.

A third option is to add the following to the run commands:

This actually seems to work (and stops at the breakpoint).

So great I have something that works, but I'd like some more information on how all these options work and fit together, are there any docs that indicate what order everything is run in, and what command each checkbox option inserts an d where? Also why is the load file with my custom .bin is not working.?

Thanks for any advice,

Hi Jing, thanks for your reply.

Unfortunately this doesn't really describe my situation. I'm not pre-loading a binary, I'm trying to load a custom binary (converted .axf -> .bin and then adding a header with length and CRC fields) as part of the debug launch. I could certainly manually program the custom binary using Jlink commander / Jflash / ... and then use this technique to debug a pre-loaded binary, but that's an extra step and it shouldn't be necessary.

To clarify I have a post build script that converts the linked .axf to a .bin, and then prepends a small header with the CRC and the length to that .bin. So my custom.bin llooks like:

In the "startup" tab of the jlink debug launch I should be able to do: 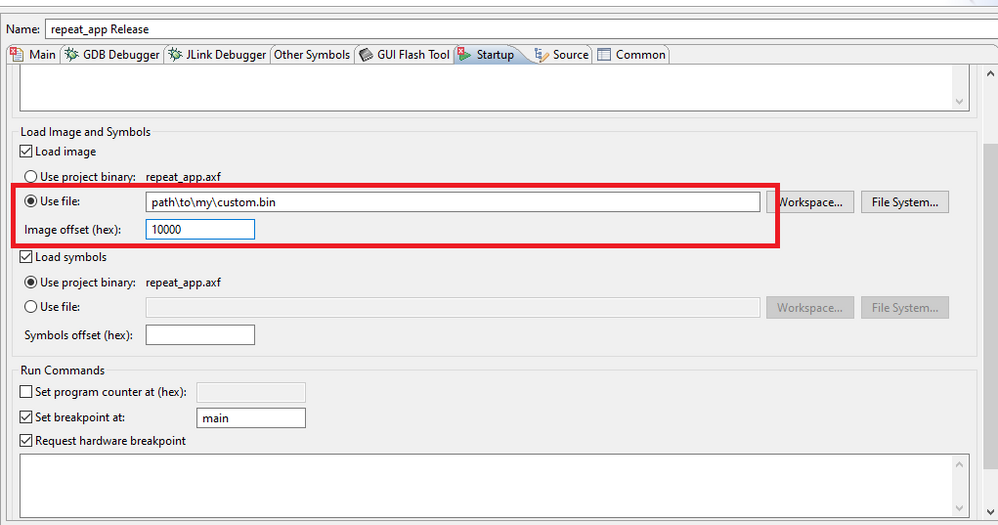 My working method is:

Why does the "use file" option not work? What does that do? Additionally I tried putting the "loadbin" command in the "initialization commands" box and that also failed, why is that?

What I want to know is how each of these options gets parsed and in what order. For example:

Please see setion 11.3.4 in MCUXpresso_IDE_User_Guide, debugging pre-loaded binaries. It shows how to debug via a bootloader, or debug additional code preloaded(into flash) generated by another project.

This article should also helpful to you.

sorry I think I replied to my original post rather than to your reply. Please see my other reply.