This document describes the different source clocks and the main modules that manage which clock source is used to derive the system clocks that exists on the i.MX RT’s devices.

It’s important to know the different clock sources available on our devices, modifying the default clock configuration may have different purposes since increasing the processor performance, achieving specific baud rates for serial communications, power saving, or simply getting a known base reference for a clock timer.

The hardware used for this document is the following:

Keep in mind that the described hardware and management clock modules in this document are a general overview of the different platforms and the devices listed above are used as a reference example, some terms and hardware modules functionality may vary between devices of the same platform. For more detailed information about the device hardware modules, please refer to your specific device Reference Manual.

The Clock Controller Module(CCM) facilitates the clock generation in the RT platforms, many clocking variations are possible and the maximum clock frequency for the i.MX RT1060 device is @600MHz.The following image shows a block diagram of the CCM, the three marked sub-modules are important to understand all the clock path from the clock generation(oscillators or crystals) to the clock management for all the peripherals of the board. 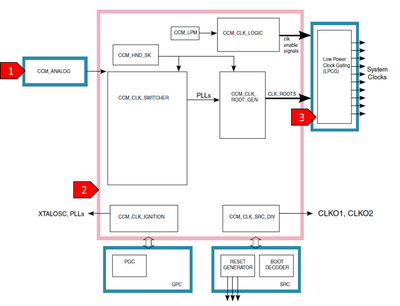 This submodule contains all the oscillators and several PLL’s that provide a clock source to the principal CMM module.

Many of the serial IO modules depend on the fixed frequency of 24 MHz. The reference clock that generates this crystal oscillator provides an accurate clock source for all the PLL inputs.

Generally, RTC oscillators are either implemented with 32 kHz or 32.768 kHz crystals. This Oscillator should always be active when the chip is powered on.

A lower-power RC oscillator module is available on-chip as a possible alternative to the 24 MHz crystal oscillator after a successful power-up sequence. The 24 MHz RC oscillator is a self-tuning circuit that will output the programmed frequency value by using the RTC clock as its reference.

Note. An external 32KHz clock source must be used since the internal oscillator is not precise enough for long term timekeeping.

There are 7 PLLs in the i.MXRT1060 platform, some with specific functions, for example, create a reference clock for the ARM Core, USB peripherals, etc. Below these PLLs are listed.

* Two of these PLLs are each equipped with four Phase Fractional Dividers (PFDs) in order to generate additional frequencies for many clock roots.

Each PLLs configuration and control functions like Bypass, Output Enable/Disable, and Power Down modes are accessible individually through its PFDs and global configuration and status registers found at the CCM internal memory registers.

The Clock Control Module (CCM) generates and controls clocks to the various modules in the design and manages low power modes. This module uses the available clock sources(PLL reference clocks and PFDs) to generate the clock roots. There are two important sub-blocks inside the CCM listed below.

This sub-block provides the registers that control which PLLs and PFDs outputs are selected as the reference clock for the Clock Root Generator.

This sub-block provides the registers that control most of the secondary clock source programming, including both the primary clock source selection and the clock dividers. The clock roots are each individual clocks to the core, system buses, and all other SoC peripherals, among those, are serial clocks, baud clocks, and special function blocks. All of these clock references are delivered to the Low Power Clock Gating unit(LPCG).

The LPCG block receives the root clocks from CCM and splits them to clock branches for each peripheral. The clock branches are individually gated clocks.

The following image shows a detailed block diagram of the CMM with the previously described submodules and how they link together. 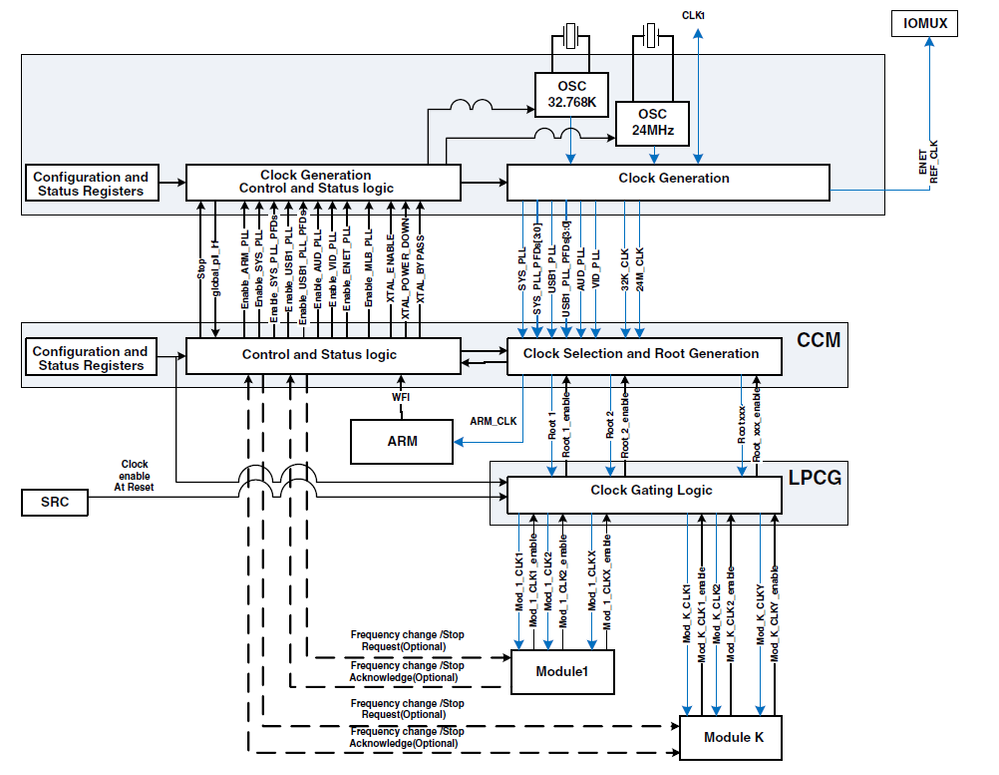 The Clock tools available in MCUXpresso IDE, allows you to understand and configure the clock source for the peripherals in the platform. The following diagram shows the default PLL1 mode configured @600MHz, the yellow path shows all the internal modules involved in the clock configuration.

From the previous image notice that PLL1 is attached from the 24MHz oscillator, then the PLL1 is configured with a pre-scaler of 50 to achieve a frequency @1.2GHz, finally, a frequency divider by 2 let a final frequency @600MHz.

For example, you can use the Clock tools to configure the PLL pre-scaler to 30, select the PLL1 block and then edit the pre-scaler value, therefore, the final clock frequency is @360MHz, these modifications are shown in the following figure.

1.2 Export clock configuration to the project

After you complete the clock configuration, the Clock Tool will update the source code in clock_config.c and clock_config.h, including all the clock functional groups that we created with the tool. This will include the clock source for specific peripherals.
In the previous example, we configured the PLL1 (ARM PLL) to a functional frequency @360MHz; this is translated to the following structure in source code: “armPllConfig_BOARD_BootClockRUN” and it’s used by “CLOCK_InitArmPll();” inside the “BOARD_BootClockPLL150MRUN();” function.

Example: The next steps describe how to select a clock source for a specific peripheral.

For example, using the GPT(General Purpose Timer) the available clock sources are the following:

The function loads several parameters to the configuration struct(gptConfig), one of the fields is the Clock Source configuration, modifying this field will let us select an appropriate clock source for our application, the following figure shows the default configuration parameters inside the “GPT_GetDefaultConfig();” function. 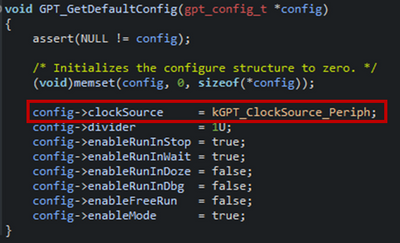 In the default GPT configuration struct, the Peripheral Clock(kGPT_CLockSource_Periph) is selected, the SDK comes with several macros located at “fsl_gpt.h” header file, that helps to select an appropriate clock source. The next figure shows an enumerated type of data that contains the possible clock sources for the GPT.

For example, to select the Low-Frequency Reference Clock the source code looks like the following figure. 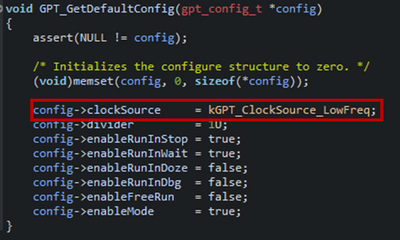 Notice that all the peripherals come with a specific configuration struct and from that struct fields the default clocking parameters can be modified to fit with our timing requirements.

One of the GPT clock sources is the “Peripheral Clock Source” this clock line can be modified from the Clock Tools, the following figure shows the default frequency configuration from Clock Tools view.

In the previous figure, the GPT clock line is @75MHz, notice that this is sourced from the primary peripheral clock line that is @600MHz attached to the ARM core clocks.

For example, modify the PERCLK_PODF divider selecting it and changing the divider value to 4, the resulting frequency is @37.5Mhz, the following figure illustrates these changes.

1.3 Export clock configuration to the project

After you complete the clock configuration, the Clock Tool will update the source code in clock_config.c and clock_config.h, including all the clock functional groups that we created with the tool. This will include the clock source for specific peripherals.

In the previous example, we configured the GPT clock root divider by a dividing factor of 4 to achieve a 37.5MHz frequency; this is translated to the following instruction in source code: “CLOCK_SetDiv(kCLOCK_PerclkDiv,3);” inside the “BOARD_BootClockRUN();” function.