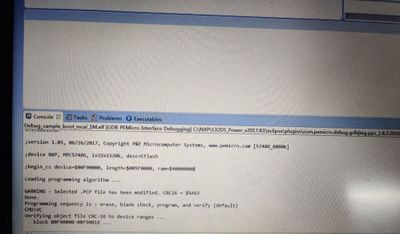 While I was burning MPC5748, the following LOG print appeared

After the occurrence of this phenomenon, it is stuck in the 99% burning phase.and at this time, S32 must be shut down, and restart the computer, so that you can continue to use S32 to debug, otherwise it will show error: PE burner is being occupied by other processes burning, please select other PE.

When this chip is in such a situation, after I replace other programs and debug. the same LOG printing still appears. The only difference is that the blocks displayed by the programs are in different positions.

After I replace the chip, DEBUG can be normal, and that chip can no longer be used, because DEBUG fails.

I was wondering, is this happening because the FALSH on this chip is faulty?Is there any way I can fix this mistake?Such as through other similar tools to achieve direct full - slice erase?

PS: In the last three months, there have been two MPC5748G during the debugging process

you can try erase your MCU by PE Micro PPC Nexus tool - here is thread with more details. The erase command should work with Trial version - https://community.nxp.com/t5/S32-Design-Studio/MPC5777C-update-DCF-record/m-p/791557 .