KINETIS devices have Flash base bootloader or ROM bootloader. They have same structure and same download tools. MCUBOOT shows supported device. The bootloader not only support plaintext image, but also encrypted image which is encrypted by AES. This can protect user’s application code from unauthorized using.

Many NXP Kinetis device SDK have integrated bootloader. Take FRDM-K64F as example, the bootloader project is in

In K64 bootloader, the key is stored in 0xb000. But the application code is start from 0xa000. That means each time the application is upgraded, key file need to be download again.

The elftosb tool can generate a key. But of course, you can take any string as key.

Use the key to encrypt application image. Here is the bd file. 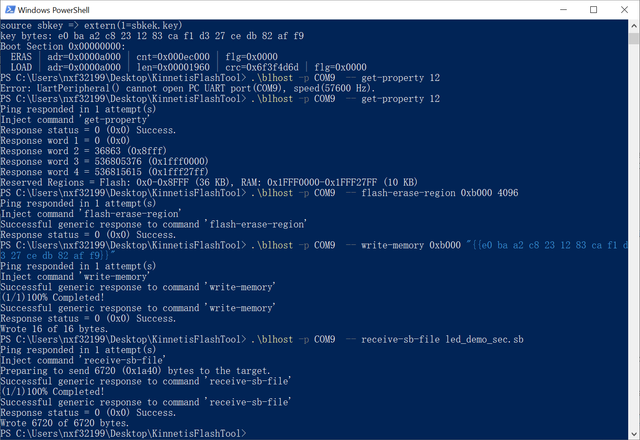 Use keyboard to input key is really annoying. There is a GUI tool named KinetisFlashTool which can download image same as blhost.exe. To download encrypted image by this tool, we can make a sb file to download key first. Here is the bd file.

Using elftosb to generate the sb file. The elftosb command line is as below

This sb file should be download at first, then download the encrypted application image. When customer want to download security image via USB MSC or HID, this is the only way to download key. There is a limitation in those bootloader which version is lower or equal to v2.7.0. MSC function and HID function can’t be enabled together. Otherwise bootloader will fail when copy encrypted sb file to MSC disk.

But it is really strange that key file should always come with encrypted file. It is reasonable to keep the key in secure status, for example, an untouched place in flash. K64 has a program once field which is located in program flash IFR. This is a standalone space different from main space. It’s address is from 0x3C0 to 0x3FF. MCU core can read or write this area by special flash command. We can put the AES key here. Again, we can use sb file to download this key.

Then we should modify sbloader_init() in sbloader.c. The source code only read key form 0xb000. We should have it read key from IFR.

The ROM bootloader hasn’t encryption algorithm. Application should include algorithm code and assign the address to bootloader, or preprogram BCA table and MMCAU code into flash.

Before you program these code into flash, new address must be written into it. For example, we put MMCAU code into 0x7f800, then we should modify the BCA table as below

And then, according this new address, modify the MMCAU_function_info structure in mmcau_cm0p.bin.

In order to avoid using manual operation in production, above steps can be integrate in a single sb file.

The bd file in K64 example can be reused, just need to change the image address to 0x00.

Press the reset button, after 5 second, the led will blink.