This is kind of a continuation of the previous post (https://community.nxp.com/t5/i-MX-RT/Debug-without-blowing-efuses-setting-efuses-from-J-Link/m-p/126...).

I cannot get reliable debugging via JLink from MCUXpresso. The behaviour is as follows:

This is really getting to be annoying, so far it has been 2 days and we don't have a way to reliably hook a debug session to our board.

The debugger connections are as follows:

I have also tried hooking up the RST pin from the J link to TRSTB / GPIO AD B0 11 on the NXP and that made the debugger unable to connect.

I have attached a debug launch file that I tried to use, but I have tried various settings in the launch file and they don't seem to have any effect.

e.g. both checked / unchecked versions of: 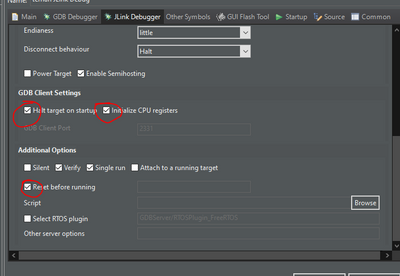 Is there something I'm missing? Can anyone confirm they have successfully used MCUXpresso and a JLink to program / debug an RT1064's internal SPI flash?

I found someone on the segger forums with the exact same issue as me, but I don't see a resultion:

I'm using a J-Link base which doesn't support external memory programming - can anyone confirm if the Jlink base works with the RT1064?

Also, for what it's worth, we're developing with the RT1064CVL5B, whereas the SDK only has the option for RT1064CVL5A, though I'm not sure what difference that would make, if any.

Hi,
Thank you for your interest in NXP Semiconductor products and for the opportunity to serve you.
1) Is there something I'm missing? Can anyone confirm they have successfully used MCUXpresso and a JLink to program/debug an RT1064's internal SPI flash?
-- It's able to debug the RT1064 in the MCUXpresso with Jlink, so I guess the problem may be related to the Jlink debug tool, you can try a Jlink-plus tool.
2) RT1064CVL5B is the later version of the RT1064CVL5A.
Have a great day,
TIC

We don't have access to a j link plus, hence the j link base... If anyone can confirm the issue is with the base vs + we'd be happy to update, but u less we can prove its the cause of a problem it seems kind of silly to waste 400$ to update our debuggers when it might not solve anything.

I know the B version is the updated A version, but the SDK only lists the A version. Can you confirm the SDK supports both the A and B version?

Hi,
Thanks for your reply.
I try to use a J-link base (V8.00) for a test, it can recognize the Cortex-M7 core in the J-link commander.
However, it fails to enter debug mode in the MCUXpresso IDE.
To be prudent, you can contact the Segger to confirming.

The SDK library definitely supports both the A and B versions.

Have a great day,
TIC

Thanks - I'm waiting for my account to be approved in order to ask there.

You had previously said that the j link works - does the j link plus with version 8.00 work? Or perhaps it's broken in a recent update and an older version works? I did update my j link but I can't remember from which version (and there were other issues in the way at the time). I'll give some older versions a test tomorrow.