I have a custom board with the i.MXRT 1062 processor has VDD_SNVS_IN connected to a rechargeable 3V coin cell battery with a 2k resistor in series. (Per the hardware design guide, there is a diode between VDD_HIGH_IN and VDD_SNVS_IN to pull up SNVS). Everything works fine, and when the device is powered, it charges the battery. However, when I power off the system so the only voltage in the system is the coin cell batter, I see a 225mV drop across the 2k, meaning the battery is discharge over 100uA. This seems high. Looking at AN12094 it seems like the SNVS domain should draw between 14uA and 5uA (not sure if I'm reading the right table).

Is 100uA high for the SNVS line? If so, any ideas on what it could be? All the IO lines from the i.MXRT go to an unpowered FPGA, and I haven't seen any IO lines sag or draw any current. Do I need to run some code / shut-down procedure on  the i.MXRT prior to powering off the system to get it to be more power efficient?

I've attached the schematic around the i.MXRT Power and SNVS_IN. The whole schematic is large and complicated, is there a section in particular you want to look at?

Hi,
Thanks for your reply.
Firstly, whether the power off means the 3.3V_D is shut down, if yes,
when power off happens, you find that 225mV drop across the 2k, I'd like to know whether you ever measure the current of the line that is marked in the below figure. 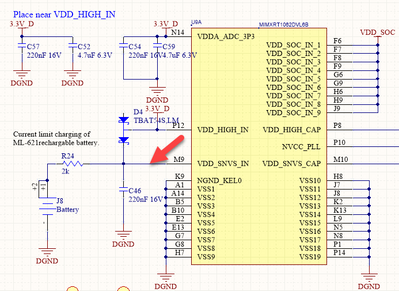 Further, I'd like to know whether measure the current of the same place as the above when the code is running.
Looking forward to your reply.
Have a great day,
TIC

Sorry if this is a double-post, my previous submission seems to have not gotten through.

Unfortunately, I cannot directly measure the current going into the i.MXRT pad M9 as I have no sense resistor there. The current to it comes from both the battery (which I can measure via R24) and the diode D4. When powered off, D4 is 0.2V on the high side (3.3V_D) and ~3V on the low side, so no current is flowing through diode and thus the R24 current (~100uA) is the current that goes into pad M9.

When the system is powered on, I see a 130mV forward drop across D4, so there is some current flowing through it, but it is hard to measure how much. The datasheet for the diode shows a ~150mV drop at 100uA of current, but doesn't show voltage for lower currents. Additionally, that D4 diode is also charging the the battery via R24, which, depending on the charge of the battery is typically taking 100uA -200uA. Given that low voltage drop and that most of the D4 current is going to the battery, I think the current into pin M9 is less than 50uA, but I don't think I can measure how much less.

Hi,
Thanks for your reply and clarification.
Maybe you can remove the R24 resistor and measure the current via the line when the power is off.
TIC

Maybe I'm not understanding, but if I remove R24 then when power is off, then the batter is disconnected nothing is powered and so there is no current to measure. Can you clarify what you'd like measured?

Hi,
Thanks for your reply.
1) Can you clarify what you'd like measured?
-- Sorry for confusing you, I'd like to suggest you use a 0-ohm resistor instead of the R24.
Have a great day,
TIC

Thanks for the clarification. If I replace R24 from 2k to 0 Ohms, then I can no longer measure the current flowing through it (as the voltage drop across it will be 0). I'd just be able to see the battery voltage. Maybe I'm missing something, but what can I measure / test with this change?

Hi，
Thanks for your reply.
1) What can I measure/test with this change?
-- After removing the R24, you can populate the 0 ohms to replace it, definitely, you also can use a multimeter to connect it to measure the current.
Have a great day,
TIC

Ok, I removed R24 and instead placed a current meter across it. I measured 175uA of current when the board was off and the battery was at 3.3V. Any ideas on why the VDD_SNVS_IN line is drawing so much current?

Hi,
Thanks for your reply.
I'd like to suggest you to measure the current of VDD_SNVS_IN when the customize board enters different low power modes and check whether the results are according to the below figure.

Hi，
Thank you for your interest in NXP Semiconductor products and for the opportunity to serve you.
To be prudent, before answering your question, I was wondering if you can upload the schematic.
Have a great day,
TIC