Regarding RT10XX programming, it is mainly divided into two categories:

To this method, we can use the MCUBootUtility tool, or blhost+elftosb+sdphost cmd method, we also can use the NXP SPT(MCUXpresso secure provisional Tool). This programming need to enter the serial download mode, then use the flashloader supported UART or the USB HID interface.

2) Use Programmer or debugger with flashdriver programming

This method is usually through the SWD/JTAG download interface combined with the debugger + IDE, or directly software burning, the chip mode can be in the internal boot, or in the serial download mode, with the help of the flashloader to generate the flash burning algorithm file.

Method 2, The burning method using the debugger tool usually ensures that the burning code is consistent with the original APP.

Method 1, Uses the blhost method to download, usually blhost will regenerate an FCB with a full-featured LUT to burn to the external flash, and then burn the app code with IVT, that is, without the FCB header of the original APP, and re-assemble a blhost generated FCB header and burn it separately.

However, for some customers who need to read out the flash image and compare with the original APP image to check the difference after burning, the commonly used blhost method will have the problem of inconsistent FCB area matching. If the customer needs to use the blhost burning method in serial download mode, how to ensure that the flash image after burning is consistent with the original burning file? This article will take the MIMXRT1060-EVK development board as an example, and give specific methods for the command mode and SPT tool mode.

This FCB LUT just contains the basic read command, normally, to the app booting, the FCB just need to provide the read command to the ROM, then it can boot normally.

But what happens to the memory downloaded by blhost? Based on the MIMXRT1060-EVK development board, the following shows how to use the command line mode corresponding to blhost to burn the SDK led_blinky project app, and read out the corresponding flash burning code to analysis.

The normal blhost programming is to use the cmd line method, and provide an app which is without the FCB header(Even app with the FCB, will exclude the FCB header at first), then use the elftosb.exe generate the app with IVT, eg ivt_evkmimxrt1060_iled_blinky_FCB_nopadding.bin, download the flashloader file ivt_flashloader to internal RAM, and jump to the flashloader, then use the fill-memory to fill option0, option1 to choose the proper external flash, and use the configure-memory to configure the flexSPI module, with the SFDP table which is got from get configure command, then fill the flexSPI LUT internal buffer. Next, fill-memory 0x20203000 4 0XF000000F associate with configure-memory will generate the full FCB header, burn it from flash address 0x60000000. At last, burn the app which contains IVT from flash address 0X60001000, until now, realize the whole app image programming.

So, if you want to keep the FCB header of the original APP instead of the header generated and burned by option0,1 configure-memory, how to do it? The method is that you can also use Option0, 1 to generate and fill in the LUT for flexSPI for communication use, but do not burn the corresponding generated FCB, just burn the FCB that comes with the original APP.

2.2 Reuse option0 and option1 to program the original APP LUT

The following command gives reuse option0 and option1, generates LUT and fills in flexSPI LUT for connection with external flash interface, but does not call:

Pic 2 is the comparison between the read data after programming and the original programming data. It can be seen that the FCB programmed at this time is exactly the same as the original code FCB. 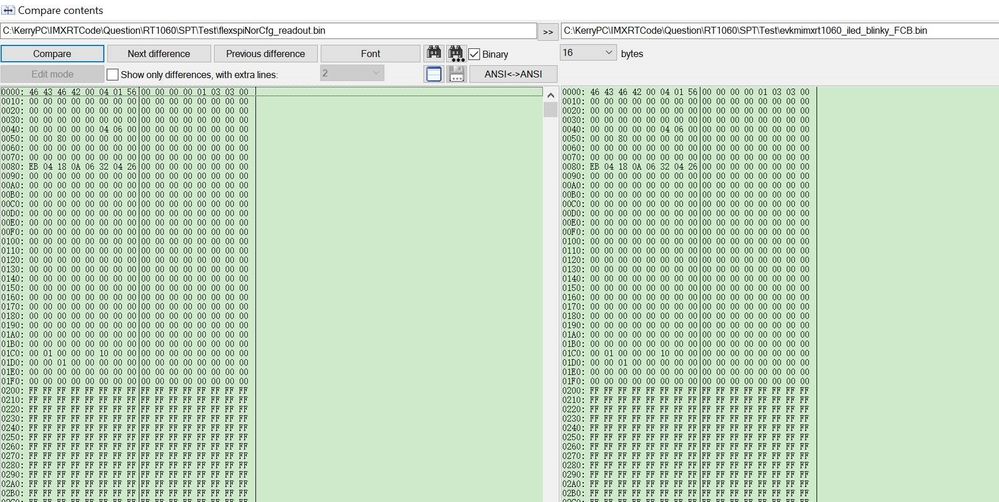 The configuration of Option0 and Option1 is usually for chips that can support SFDP table, but some flash chips cannot support SFDP table. At this time, you need to fill in the flexSPI LUT for the full LUT manually. The so-called full LUT command is not only read commands, but also supports erasing, program, etc. In this way, the flexSPI interface can be successfully connected to the external FLASH, and the corresponding functions of reading, erasing, and writing can be realized. Therefore, the method in this chapter is to use a single-line command, which is also a command supported by general chips, to enable the corresponding function of flexSPI, so it can complete the subsequent APP code programming.

We can see: 03H is read, 05H is read status register, 06H is write enable, D8H is the block 64K erase, 02H is the page program, 60H is the chip erase. This is the 1bit SPI method full function LUT command, which can realize the chip read, write and erase function.

The command line is, source file is attached rt1060 cmd_fdcb_1bit_sdr_flashA.bat:

In the command line, where option0,1 was previously filled in, instead of filling in the data of option0,1, the 512-byte Bin file of the complete FCB LUT command is directly given, and then the configure-memory command is used to configure the flashloader’s FlexSPI LUT with the FCB file.

so that it can support read and write erase commands, etc.

The NXP officially released MCUXPresso Secure Provisional Tool can support the function of retaining the customer's FCB, but the SPT tool currently uses the APP FCB to fill in the flashloader FlexSPI FCB. Therefore, if the customer directly uses the old SDK demo which just contains the read command in the LUT to generate an APP with FCB, then use the SPT tool to burn the flash, and choose to keep the customer FCB in the tool, you will encounter the problem of erasing failure. In this case, analyze the reason, we can know the FCB on the customer APP side needs to fill in the full FCB LUT command, that is, including reading, writing, erasing, etc.

The following shows how the old original SDK led_blinky generates an image with an FCB header and writes it in the SPT tool. As you can see in Pic 5, the tool has information that if you use APP FCB, you need to ensure that the FCB LUT contains the read, erase, program commands. Pic 6 shows the programming situation of APP FCB LUT only including read. It has failed when doing erase. The reason is that there is no erase, program and other commands in the FlexSPI LUT command, so it will fail when doing the corresponding erasing or programming. 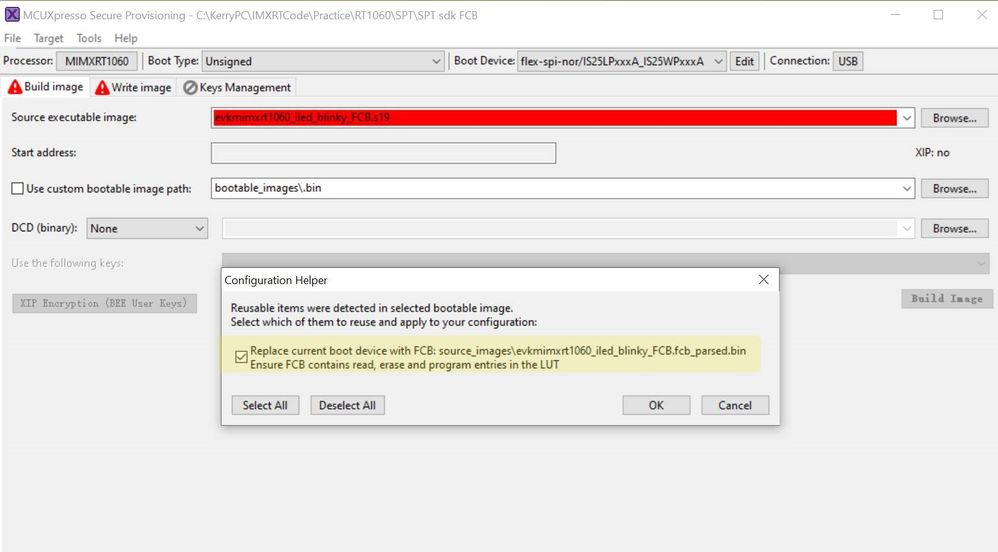 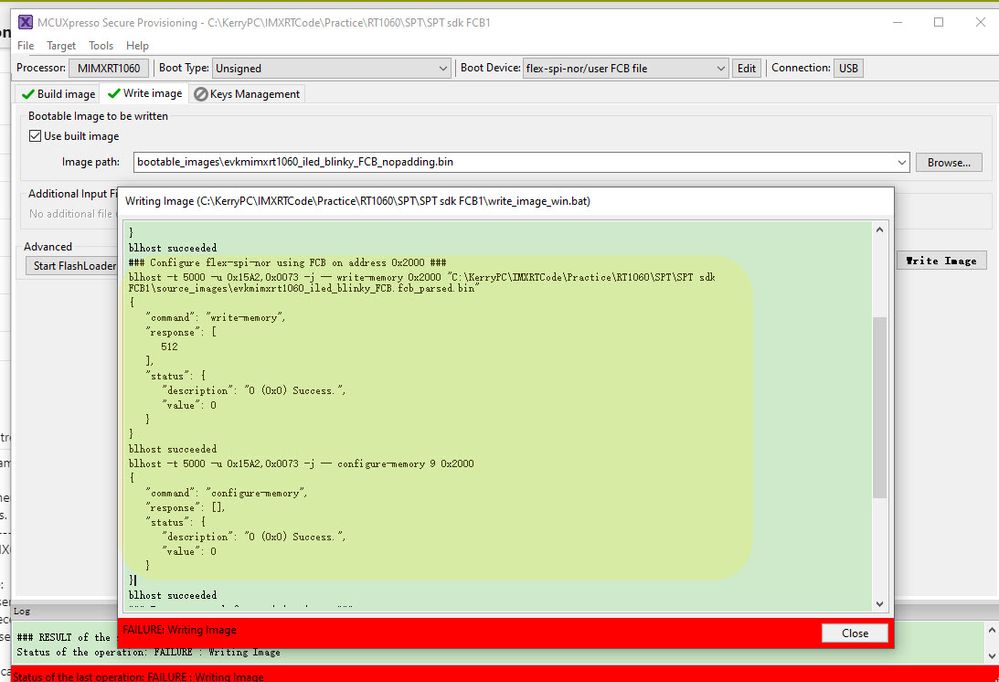 If you look at the specific command, as shown in Pic 7, you can find that the SPT tool directly uses the FCB header extracted from the APP image to flash the LUT of the flashloader FlexSPI, so there will be no erase and write commands, and it will fail when erasing.

The following is how to fill in the LUT in the FCB of the SDK, open evkmimxrt1060_flexspi_nor_config.c, and modify the FCB as follows:

Use the above FCB to generate the APP, then use the SPT tool to burn the app with customer FCB again, we can see, the programming is working now.

In summary, if you need to reserve the customer FCB, you can use the above method, but if you use the SPT tool, you need to add read, write, and erase commands to the LUT of the code FCB to ensure that flexSPI successfully operates the external flash.