In the i.MX8MP support 3 SDIO interface, and in the reference board i.MX 8M Plus LPDDR4 EVK design default use the eMMC connect to the USDHC3 to boot up from emmc，use the SD card connect to the USDHC2 port. When the U-Boot starts, it will detect the starting slot and automatically set mmcdev and mmcroot, for the USDHC3 in the default Linux set is mmc dev 2.

But some customer need to change to the mmc dev 0, make the mmc0 work, see the following introduction.

MMC (multiMedia card) is a communication protocol that supports two modes, SPI and MMC. EMMC is a chip that supports MMC protocol. Both eMMC and SD card package the flash controller and NAND Flash together, but their interfaces are different. eMMC is generally BGA packaged and soldered on PCB. 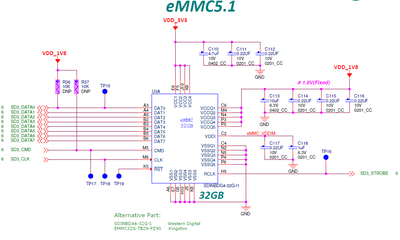 CLK: It is used to output clock signal from the host side, synchronize data transmission and drive device operation. Each cycle can be transmitted on the rising or falling edge, or both

CMD: The signal is mainly used by the host to send a command to the eMMC and the eMMC to send a response to the host.

Data Strobe: The clock signal is sent to the host by eMMC with the same frequency as the CLK signal. It is used for synchronization of data reception at the host side. The Data Strobe signal can only be configured and enabled in the HS400 mode. After being enabled, the stability of data transmission can be improved and the bus tuning process can be omitted.

2 For the EMMC design on the i.MX8MP LPDDR4 EVK 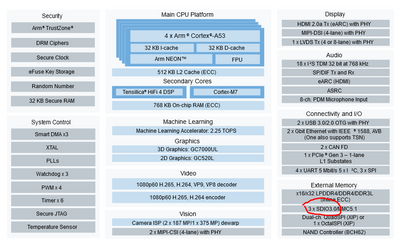 At i MX8MP supports SD/MMC/eSD/eMMC/SDXC, and starts and boots using the USDHC port based on setting of the BOOT_MODE[3:0] pins. 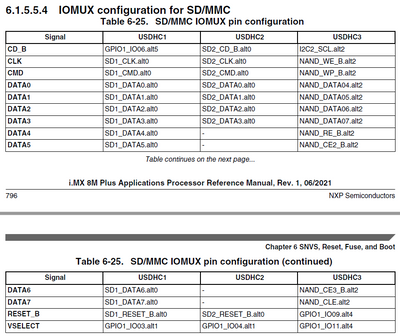 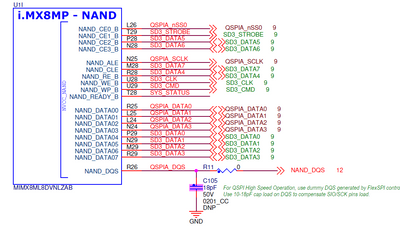 The hardware design is as shown above. The eMMC is connected to the SD3 interface, and the software is configured in this way by default.

Note: It should be noted here that although the i. MX8MP USDHC1 supports 8bit, it can be used to connect to EMMC, i The MX8MP does not support booting from the SD1 interface. You can see from the boot mode pins above that there is no corresponding setting. Special attention should be paid to this. Some customers will ignore this when designing hardware. This is the design. There is no way for the software to start from USDHC1.

2.3 The port number of the default BSP

In the i.MX 8M Plus LPDDR4 EVK development board design, the eMMC is connected to the USDHC3 as the default boot device When the U-Boot starts, it will detect the starting slot, and automatically set mmcdev and mmcroot. For USDHC3, the default is mmc dev 2.

The device structure of SD/MMC cards is similar. MMC should be the predecessor of SD, but the design of MMC at that time was half that of SD. Therefore, the SD/MMC driver is universal, and the device node of Linux continues the name of MMC.

Meaning of blk: blk is a block device, and the number after ⾯ is the serial number of the device

Meaning of p: p indicates partition, and p1 is the first partition

We can see the correspondence between the USDHC interface and the mmc under Linux. The kernel MMC module now uses a fixed mmcblk index for the uSDHC slot. The default BSP is "mmc2=&usdhc3":

For the emmc the related port is :mmcblk2

By default, the flash target is MMC: 2 after the Demo images burning of the development board is started. 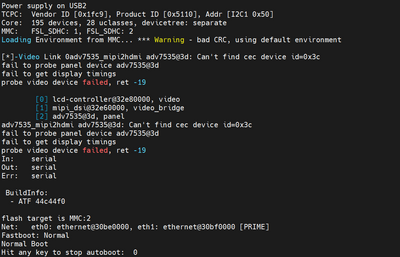 3 mmc0 work as emmc device and boot up

We need to modify the device, u-boot, kernel related part for the mmc0 work on the android BSP,

In the kernel section need to change all the related mmcblk2 to mmcblk0.

Change all the related mmcblk2 to mmcblk0.

All the modify see the Patch in the attachment.