We are using the RT1060 processor. Since a long time, we experience problems from time to time in the standard library. We are using the redlib library. Often there are hard faults when using strlen, memcmp or in the current case fabs().

The problems often appear, when code is changed in a completely different part of the application. And it disappears, if e.g. only a line of random code is added.

The debugging of the problem shows that the processor does not return to the calling code on the BX LR instruction. Instead, it just continues to the next address in the code.

Here is a debug session showing the problem: 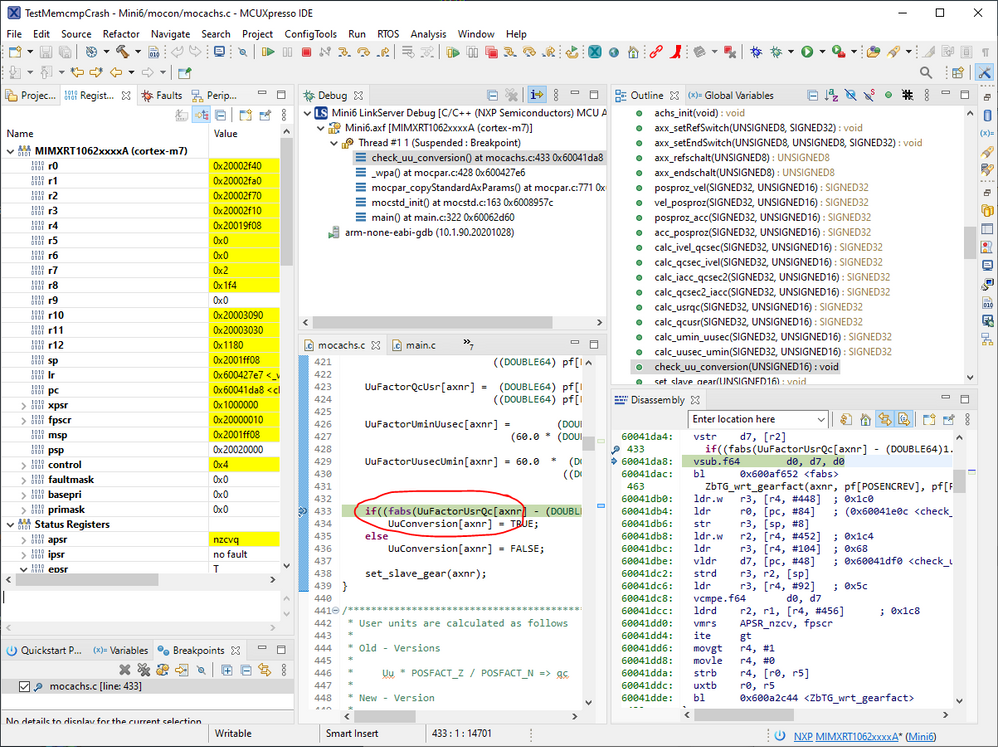 This is the situation two steps later, after the execution of the BL.
It's a bit strange that the disassembly shows the code to be in the asin() function. But the PC shows address 0x600aff652 address. So I think this is a debugger problem? Or could this be a problem, that the call is to 0x600aff652, but the fabs adress is at 0x600aff653?

The next three steps seem normal: 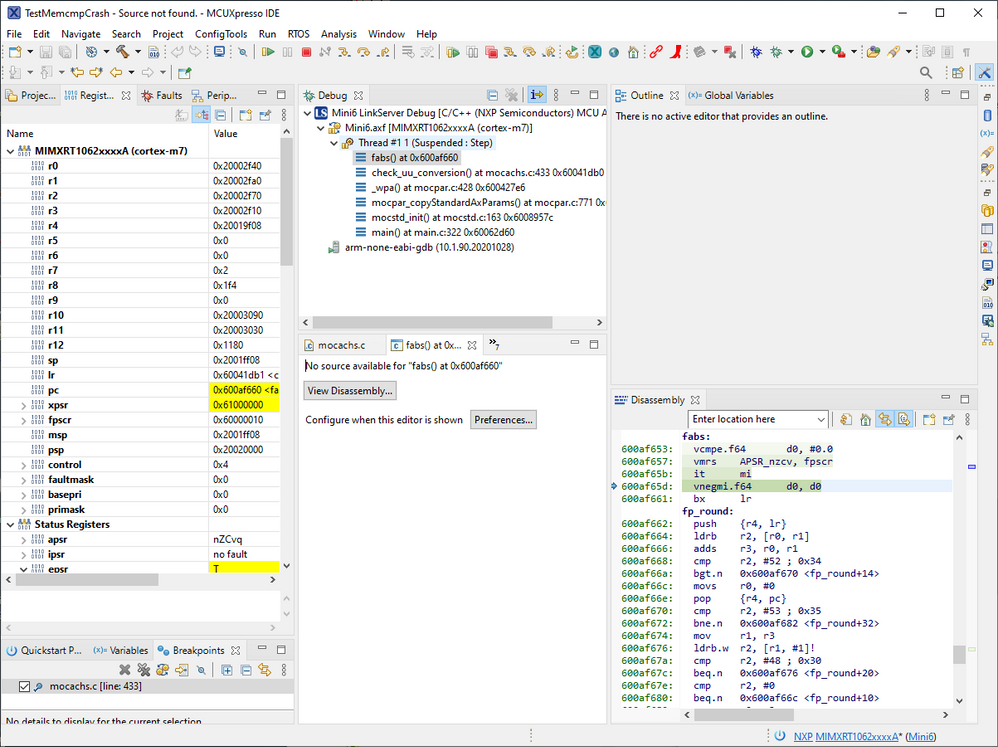 But the next single step, jumps into the fp_round() function instead of going back: 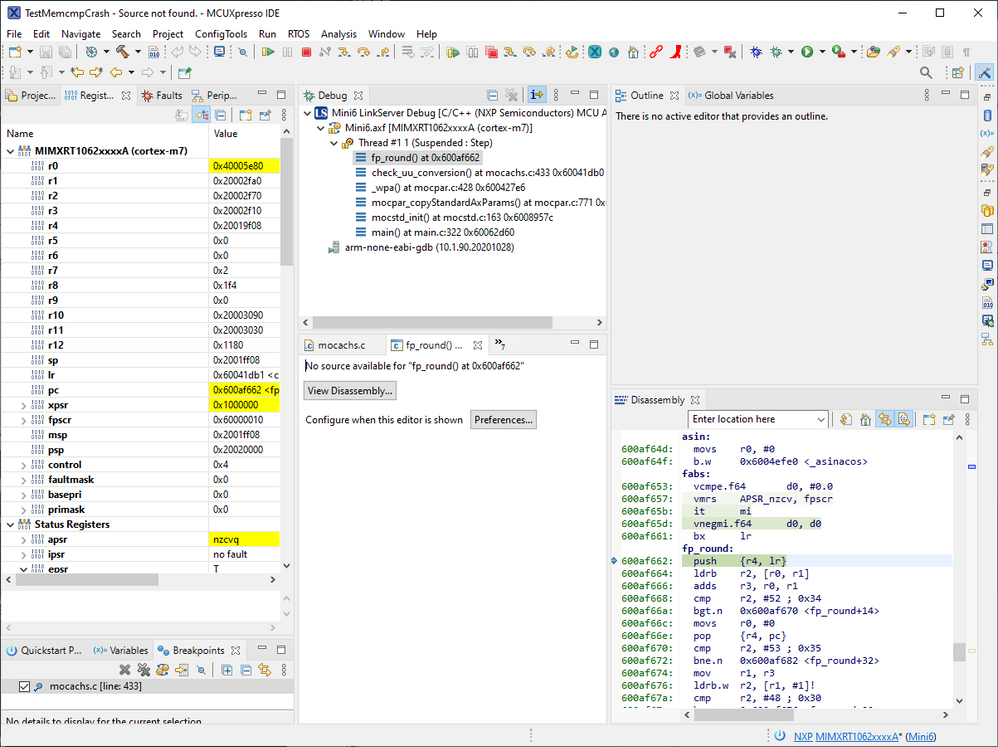 From there, it goes on in the pf_round function until it crashes.

Any help is appreciated!

After two days of debugging, I think I am close to the root cause. The debugging is very difficult because very little changes to the code made the problems disappear.
In the project, we do a configuration of the FlexSPI parameters. The function looks like this:

I have now found out, that if I jump over the FLEXSPI_SoftwareReset call or remove it, the problem disappears.
This line seems to cause different kind of effects. It was causing the problem with fabs() explained above, but also a failing memcmp() described in this thread: memcmp-fails-on-RT1060

I made sure that all the code handling the FlexSPI settings is running in RAM.

Is there an explanation for these effects?

Please also help check the location of the LUT table, if it has a const value, and be stored in flash?

Please have a look at the address of the function, when it runs to an error, the address is usually aligned to a 4-bytes, or 2-bytes, for thumb-code set is 16-width length or 32-bit width. So it has no chance to be compiled as a function which address is odd.

In other words, all the function address must be a even number, such as, the address of the fp_round: 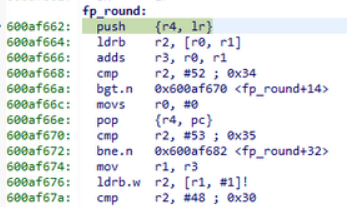 Please have a check if the lib is compiled with another compiler, or another arm core. Also, you said that :

And it disappears, if e.g. only a line of random code is added. I think that maybe the added line, lead the address to a

even one. You can also check when all the address is even or aligned to 2/4B, if the error gone?

Thanks for your reply.
I checked the address of fabs(), the failing function, and it is 0x600af652 in the current test case. 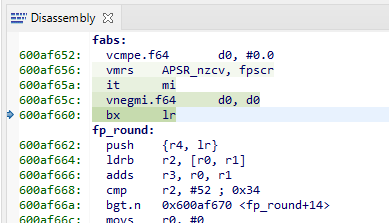 Here is some information I found with objdump about the library:

I further checked about the alignment of the function labs(). There seems to be no alignment forcement to an even number.

Here it is on an even address:

Then I add a NOP at a random place in code. This moves the function to an odd address:

Default, the compiler can help insert some "NOP" to make the alignment. But, here, I think this situtation is strange, so please help check, which compiler did you use? and if it is ok, could you please share your project, or a simple-project that can re-produce the erro?

It seems a memory issue.  check the memory overflow?  memory unalignment?...I  would suggest you narrow down the problem by using#if 0#endif

I don't understand how a memory overflow can lead to a failure of a BX LR instruction? Can you be more specific?

However, I checked that the stack did not overflow.

Or how could the code be unaligned? I understand that data can be unaligned, which usually leads to an unaligned exception. But that is not the case.

Your approach of #if0 does not work, because every minor change in the code makes the problem go away (to re-appear sometimes later at another random change). That makes it very hard to find the cause this way.

Did you try other IDE?

What is the point of this question? Do you suspect the debugger does something wrong?