Authentication is the second step required for connecting to the 802.11 Basic Service Set (BSS). Authentication and association must occur between Access Point (AP) and client.

The 802.11 authentication establishes an initial connection between the client and the access point, basically validating or authenticating that the station (STA) is a valid 802.11 device for AP.

Open System authentication: In this type of authentication, client and AP exchange authentication frames, total two frames exchange in this process. It occurs after a client STA detects an Access Point (AP) by either passive or active scanning.

The client cannot make the association request if it is not authenticated. Once the Open System authentication and association is successful, the client becomes a member of the BSS. 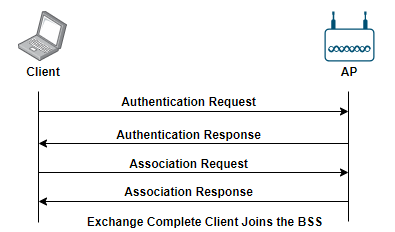 Once the Shared Key authentication is successful, the same static process will be used to encrypt the 802.11 data frames. 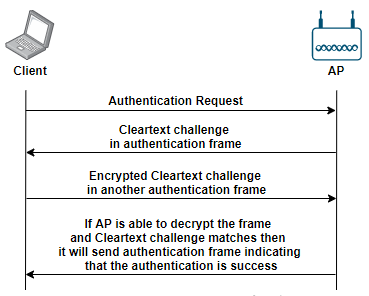 The 802.11 standards define three encryption methods. These methods are used to encrypt the MAC Service Data Unit (MSDU) payload of the data frame. 802.11i specification divides security algorithm in two types that are Robust Security Network Association (RSNA) and Pre-RSNA.

Both of these protocols are discussed in detail in later section of this post.

WEP: Wired Equivalent Privacy protocol works on second layer of the OSI model. It utilizes RC4 algorithm for the encryption.

WEP encryption process is explained below.

TKIP: As the security failures found in WEP, enhancement of WEP is introduced and that is known as TKIP. As per the 802.11i specification, TKIP uses 128 bits long key for encryption. TKIP is a combination of various algorithms wrapping WEP to offer the best security that can be obtained for the WEP-based devices. Below algorithms are added to WEP:

In WEP, Secret Static key has to be set manually so refreshing/rekeying is not the scope there, but in TKIP key rekeying mechanism is there, and that is why it can dynamically modify the keys within wireless LANs.

The AES Counter with CBC-MAC (CCM) process uses the same key for encrypting the MSDU payload and provides for a cryptographic integrity check. WEP and TKIP use RC4 and CCM uses the AES block cipher. Although AES is capable of using different key sizes, but when it is implemented as part of the CCMP encryption method,

New temporal key for every session, and a unique nonce value for each frame protected by a given temporal key is required by CCM, it also uses a 48-bit packet number (PN) for this purpose. Reusing the PN with the same temporal key nullifies all security guarantees.

WPA: When WEP was used, it was relatively easy to break the security, so the Wi-Fi Alliance developed WPA to give network connections an additional layer of security.

These exploits can usually be prevented by changing TKIP settings as keying intervals on a WLAN controller or AP, or the better solution is to stop using TKIP and upgrade to CCMP with AES.

WPA2: The Wi-Fi Alliance revised the previous WPA specification to WPA2, to ensure better security incorporated the CCMP/AES cipher. So, the only practical difference between WPA and WPA2 has to do with the encryption cipher.

WPA2 is backward compatible with WPA and it supports 802.1X/EAP authentication or pre-shared keys. WPA and WPA2 have two options for authentication, the personal mode and the enterprise mode.

Note: WPA is vulnerable to attacks in both, personal and enterprise modes.

WPA3: WPA3 is the latest generation of Wi-Fi security and provides cutting-edge protocols for security. It has been built on the bases of the WPA2, to simplify security in Wi-Fi.

Previous versions of WPA uses PSK authentication method but WPA3 uses Simultaneous Authentication of Equals (SAE). Because of SAE WPA3-Personal networks that are configured with weak/simple passphrase are not that easy to crack using attack like brute-force.

In case someone determines/guess the passphrase, it is not possible to examine the exchange and get the session keys; so even if passphrase is guessed, snoop on someone’s WAP3-Personal traffic is not possible.

WPA3 is backward compatible with WPA2 devices, it is a mandatory for Wi-Fi CERTIFIED devices. There are two versions of WPA3:

WPA3-Personal: This version provides password-based authentication, even when users choose short or weak passwords good security is maintained. It doesn’t require an authentication server and is the basic protocol for home users and small businesses use.

Robust security network association requires two 802.11 stations to establish procedures to authenticate and associate with each other and create dynamic encryption keys through the 4-Way Handshake process.

When RSN security associations are used within a BSS, there are two keys that both the devices install.

All the client stations have undergone a unique RSNA process called the 4-Way Handshake, this process will be discussed in detail later in this post. Refer Figure 4 below for the better understanding of key sharing between the AP and clients.

The 802.11 standard also defines a WLAN topology known as an Independent Basic Service Set (IBSS). In this topology multiple client stations in one physical area communicating in an ad-hoc pattern.

To seed the 4-way handshake, PSK authentication is used within the IBSS. So, whenever a client joins the IBSS, (for both the traffic types, unicast and multicast/broadcast). Refer to Figure 5 below that represents RSN in an IBSS. 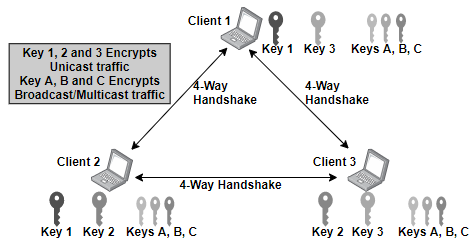 The RSN information element indicates if the authentication used is 802.1X/EAP or pre-shared key (PSK).

The 802.1X is a port based access control standard which provides an authorization framework. The Authorization Framework involves three components to ensure only valid users and devices can access the network: Supplicant, Authenticator, and Authentication Server. In 802.1X framework, Extensible Authentication Protocol (EAP) is used to validate users at layer 2 (of OSI model).

Laptop or wireless handheld device trying to access the network is used as supplicant in WLAN.

Initially, only port that is open and passing traffic is the uncontrolled port. A successful 802.1X authentication opens controller port so that other traffic can traverse the network. Usually, AP or a WLAN controller is used as the authenticator in WLAN.

The authenticator plays intermediator role by passing messages between supplicant and the authentication server.

Authentication Server: Credentials of the supplicant (requesting access and notifies the authenticator) is validated by Authentication server.

EAPOL messages are described below.

Supplicant and the authentication server use the EAP protocol to communicate with each other at layer 2. 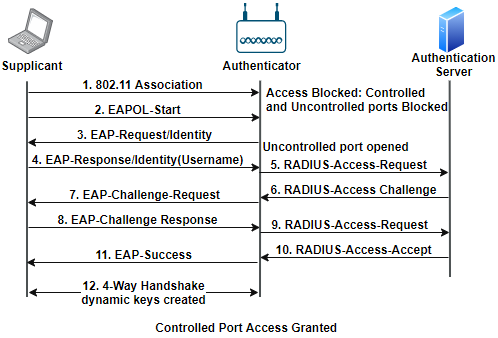 Terminologies used in 4-way handshake are listed below.

This key information is sent via a secure channel from Authenticating Server to Authenticator.

Authenticator device creates this key and refreshes it at the configured time interval to reduce the risk of GMK being compromised.

This key is unique between a client and AP. It is generated using below equation.

Here, PRF is a pseudo-random function that applies to all the input.

For each access point different GTK will be there, and with be shared with devices connected to AP.

This key is derived on Authenticator and shared with supplicant during 4-way handshake (Message 3). 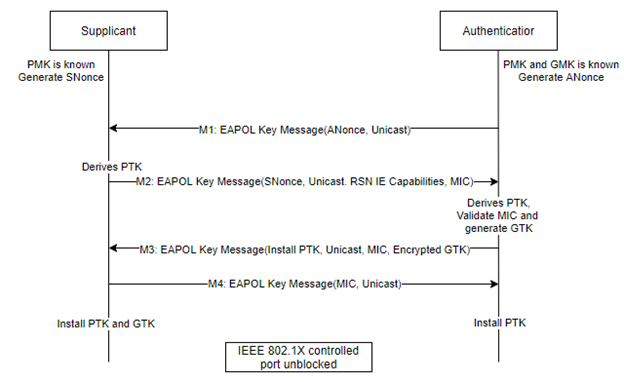 Figure 9 shows the sniffer log of the 4-Way Handshake process, here Marvell device is authenticator, and Xiaomi device is supplicant. Each message exchanged in this process is described below in detail.

Message 1: This message is sent from authenticator to supplicant. It carries ANonce. Once supplicant receives this message it can generate the PTK.

Message 2: This message is sent from supplicant to authenticator. As the supplicant generated the PTK, now it will send SNonce to AP(authenticator), so this second message carries SNonce, RSN information element capabilities and Message Integrity Check (MIC) is set. The MIC is used to check that the received message is not corrupted.

Once authenticator receives this message it will generate the PTK, validate MIC and generate GTK.

Once this process gets completed all the messages after that will be encrypted using PTK or GTK (based on unicast or broadcast message).