The MCU model we currently use is AT32F403A Artery Technology.

The Reader model is HTRC110.

Our issues so far is:

The current progress we have is:

As “READ_TAG” command have been sent and HiTag S 256 is near the RFID antenna to make sure “HiTag S 256” is available for Reader. 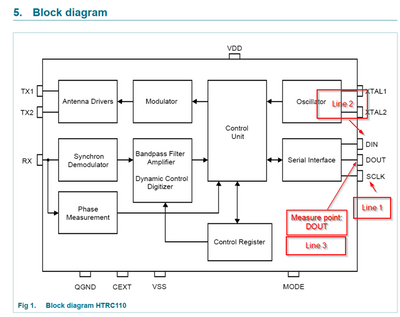 The measure result is as follows:

It seems that the signal is repeating with specific wavefrom.

We believe that Reader have successfully received the command from MCU, and have received the data from HiTag S 256. The reader is outputting the data vis DOUT.

The issue is that we do not know how to interpret and parse them by MCU.

Let us explain more about the measurement via logic analyzer:

The photo below shows READ_TAG and SCLK keep LOW

The phot below shows DOUT keep outputting signal as HiTag S 256 is detected.

The signal con be measure on third line for DOUT. We need to know to interpret and parse them by MCU.

By READ_PHASE command，the response from the reader can be read (0x0C).

Ps. As other commands of reader sent, we can get proper response from Reader, e.g., READ_PHASE(0x08), we get the 0x0E response.