I need some help to get SWO working with the RT1064-EVK-Board.

My setup is the following:

I'm using the the blinky-example from the SDK and my goal is to watch the variable g_pinSet of this example in SWO-Data-view.

I already recognized, that I have to remove all initialization things which have to do with the user led, because the LED is using the same line as the JTAG_TDI.

I removed jumper J47 to J50 to be able to flash the chip with the external debug probe.

The board is powered over USB. (Just power no data lines!)

Flashing and debugging is possible without any problem.But with SWO I got stuck.

I did the following steps:

- flashed firmware and started debugging
- In "SWO Trace config" I select a target clock speed of 600MHz
- Then I go to the "SWO data" screen and there I added the variable "g_pinSet" to be watched.
- I press the green play button. After that one of the following messages pop up:

"This configuration of ETM is not supported" (no ETMIDR register)"

"Failed to initialize SWO trace. Reason: For the target clock speed there is no suitable baud rate to communicate between probe and target"

There are several solutions online how to get the RT1064-EVK to work, but none of them seem to work for me.

Maybe someone can give me a hint what I missed.

sorry for the late response.

Thank a lot for your detailed description. Now finally after some tries it works.

- With the J-Link it was working directly

- With the MCU-Link I needed some tries but in the end I got it working. I think I had some strange settings.

Please refer to the link below. Although for this document the author uses an LPC-LINK2, the procedure to follow with the MCU-LINK it's the same.

Yes, I tried this manual before for several times but always with the same failing result.

I also tried it under windows. But the issue is also there.

Thanks for your response! I was able to replicate the behavior that you mentioned. I'm checking this internally with the MCUXpresso IDE team. I will give you an update as soon as possible.

I made it work on my end. I took as an example de gpio_led_output example of the SDK 2.9.1. I followed the steps mentioned in the link that I shared before and I didn't face any problems. There were only two differences, I used the pin tool to declare the pin, and I didn't have to modify the manifest file. Then I modified the clocks to the following:

And I enabled the clock trace in the main.

This made it work on my end. The error that you are seeing, This configuration of ETM is not supported" (no ETMIDR register), has nothing to do with the SWO and it shouldn't interfere with the SWO functionality, it's normal for this error to appear. 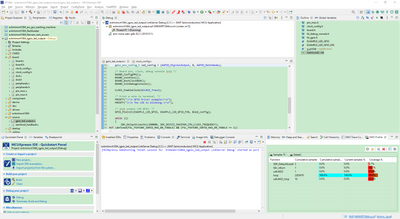 If you follow this procedure using the same SDK example project what are your results?

sorry for the late response.

Thank a lot for your detailed description. Now finally after some tries it works.

- With the J-Link it was working directly

- With the MCU-Link I needed some tries but in the end I got it working. I think I had some strange settings.